Between 1994 and 2006, he was a member of the corps de ballet and later soloist of Ballet Company of Győr. He graduated as a dancer and master of classical ballet from the Hungarian Dance Academy in 2004, after which he studied at the University of Pécs, where he obtained his Master’s degree as a cultural manager in 2007.

As a young dance artist, he won the award for best dancer at the “Inspiráció” (Inspiration) Choreography Contest, and in 2002 he earned the Philip Morris Hungarian Ballet Award in the Junior category. In 2004 the city of Győr acknowledged his work with the medal “For the Culture of Győr” and in 2005 he received the Harangozó Gyula Prize for dance artists.

Since the end of his career as a dancer, he has worked as a freelancer in the field of cultural management. He completed his internship at the Ars Media Concert and Artist Agency in Salzburg and then worked for the Konzertdirektion Schlote in the fields of PR and marketing. In 2010 in Sauvignon, and in the summer Festival Origen Cultural of 2011 in Riom, Switzerland, he acted as an assistant director; and he was an external contributor (2011), later production and tour manager (2012–2016) at the Budapest Operetta and Musical Theatre. In 2015, he joined the Szeged Contemporary Dance Company, where he was in charge of international relations.

In 2016, he collaborated in the organization of the Virtuózok (“Virtuosos”) TV Talent Scout Show for classical musicians as a member of the concert and artist agency team. Zoltán was the producer (appointed by Mátyás Várkonyi) of the gigaproduction Messiah.today rockoratorio, the Agency organised an inland tour with the production in Hungary and published a CD.

In 2018 Zoltán led the ‘dance artistic-manager course’ at the Werk Style and Communication Academy. Zoltán and the Art-Management Agency was also the production manager of the International Ballet Gala Evenings in 11th, 12th and 13th International Dance Festival in Pécs at Kodály Center. Since 2018 Zoltán is the Production Manager of Inversedance–Fodor Zoltán Company. Art Management Agency handles the international relations of the Hungarian National Dance Theater from January 1, 2021. including the selection and organisation of the international guests of the Budapest Dance Festival and the realization of the performances. Zoltán Sándor is a fluent negotiator in both English and German.

Márta Ladjánszki and Zoltán Sándor talked about cultural management in the dance scene-fields of cultural management, in the radio program of Spirit FM 87.6 in the frameworks of the podcast program ’Ízig-vérig Izrael’ of Embassy of the State of Israel in Hungary, which broadcast can be listened to here.

Report with Zoltán Sándor on the on-line cultural journal kultura.hu 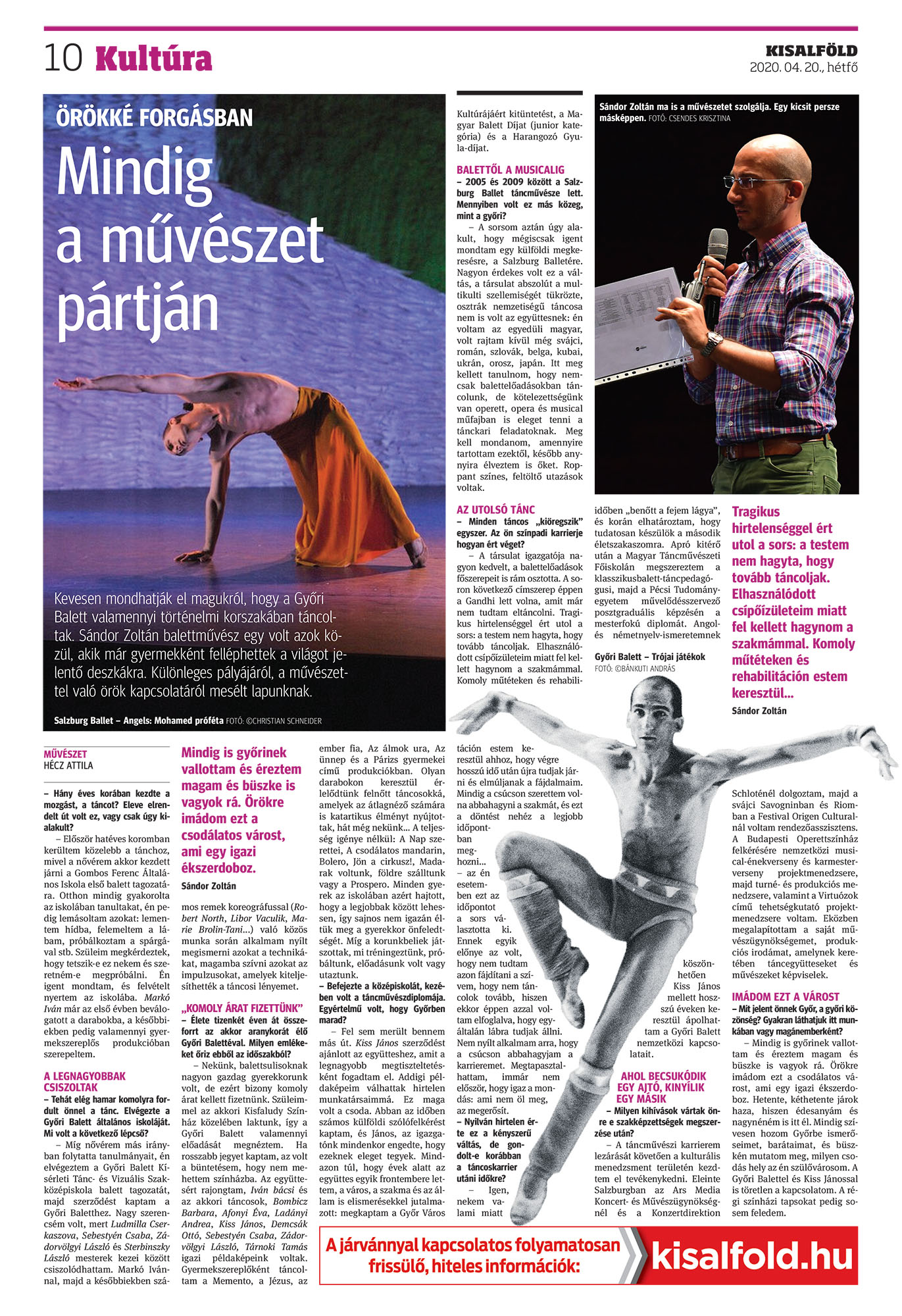